Home / Stamping down on productivity

Stamping down on productivity

In a specially commissioned article for the US Stamping Journal, Mike Brotz, Automation Division Manager for Piab in North America, outlines how the latest vacuum-based automation technology can increase plant productivity. "Every SPM counts!" he states.

”If you increase the stamping productivity by just one stroke per minute, a plant running 24/7 will be able to produce 1,440 more parts per day. Multiply that by 364 days per year, and you arrive at 524,160 extra parts each year,” Mike explains.

At the heart of any vacuum system, and also Mike's article, are the suction cups. For these, friction plays the starring role, not unlike in the tyres used for the cars produced in the stamping plant.

Starting from blank metal sheets, Mike explains how new technology is used to ensure that these blanks are picked singly in automated processes. Air knives created by blowing vast amounts of compressed air between sheets represent an increasingly common approach. However, the sheets still need to be separated, and this is where Piab's new BXF line of multi-bellow friction cups come into their own.

Piab's friction cups provide a tight grip on blanks regardless of whether their surfaces are greasy, oily, wet or very dry, and are able to cope with a great variety of conditions within the same batch. They also bend the outer edges slightly so that much less air is needed to float individual sheets, substantially reducing both air and energy consumption. In Piab's combined solution, the friction cups do most of the work, backed up by more efficient air knives. This approach will also help to minimise downtime and increase the number of SPM in the plant.

Mike goes on to offer some advice on how to choose the best suction cups, making sure these are of the right design and material for top performance. Here, the material plays an important part. The fundamental idea is to get as long service life as possible from cups chosen for a certain application and to limit the downtime. Therefore, Mike's advice is to:

A flexible vacuum system is the most productive

In his article, Mike also turns the spotlight on flexibility. Flexible systems are productive systems. Although decentralised vacuum systems using one cup per vacuum generator are generally more flexible than centralised systems where each vacuum generator serves several cups, there are pros and cons of both.

The main advantage of decentralisation is quicker response and release times. And, the independence of each cup means that failure to make contact with an object will not affect other cups. The approach also enables smaller and more flexible tubing lines.

Weight is the main disadvantage as each gripper arm will need to be fitted with several ejectors. However, Piab's lightweight ejectors solve that problem. The company's piINLINE® plus series, for example, allows for lighter cup tooling and simplifies the replacement of ejectors to avoid the downtime associated with resetting cup positions.

All-in-one ejectors represent a more centralised approach. Usually placed upstream of the robot's end-of-arm tooling, weight is not an issue for this type of system. As centralised systems, they incorporate control valves and vacuum switches that communicate with the robot. In certain settings, they offer a very cost-effective alternative.

However, the distance from the vacuum source is an issue. Long vacuum tubing will result in losses that can cause delays for both vacuum and blow-off features. Troubleshooting can also be challenging.

Piab's new IO Link piCOMPACT® ejector mitigates these problems by offering several advantages. Working with any bus system, it is unaffected by any electronic noise. It uses standard 3-wire cables and the vacuum manifold is built into the housing, allowing for multiple smaller vacuum lines running to cup automation. An amplified blow-off feature offers quick release and a confirm blow-off complete signal completes a set of features designed to simplify set-up, maximise press uptime, and improve the overall productivity.

Link to article in Stamping Journal

Do you want to try our friction cups? 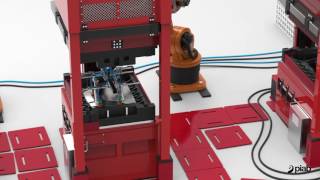