Piab has worked for many years with an OEM in Italy who is producing capsule filling machines.

The OEM's end customer, located in the US, had a new medication that has, inside a capsule, powder and a small tablet of aspirin. He required an automatic conveying system to load powder and tablets into the capsule filling machine.  As Piab is the preferred supplier of the machine builder, we were involved in the project at an early stage. Thanks to the long relationship with the OEM, they knew we had the expertise in conveying products and were sure we could solve the problem.

The requirement of the customer was to convey 100,000 tablets per hour (the weight of every pill is 105mg), the distance to be conveyed was 5 meters and the tablets could not be damaged (otherwise the dosing system stops working).

A trial was made with piFLOW®p and piFLOW®t and it was very clear that the piFLOW®t with piGENTLE® was far superior to any other technique they had used. We also made a trial to convey with piFLOW®t but, without piGENTLE® and it was a significant difference in reliability adding piGENTLE®. Without piGENTLE®, the tablets would become stuck in the hose and if we increased the feed pressure, the speed would be too high and the tablets were damaged.

It was a huge difference adding piGENTLE® as it would control the speed of the tablets without damage and that made the whole difference. Without piGENTLE®, it was far too difficult to optimize the feed pressure for proper conveying.

We observed during the tests that piFLOW®t with piGENTLE® gave outstanding results. The OEM shipped the equipment directly to the end customer in the US as the trials ensured it would work well.

As for the end customer, it took them a minimum of time to set up the conveyor and have it running nominally as a plug and play unit.

The biggest gain for the end customer is that they know they have an automatic system that meets their demands, minimizes scrap and increases their productivity in the factory. They are sure that they have bought future proof equipment as they would not have to fine tune the settings in the conveyor if the hardness of tablets changes. piGENTLE® would still make sure they had an optimum system for the tablet they were producing. 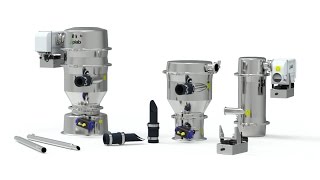 piFLOW®t – A new and gentler way to convey tablets