Home / Blog / Is there an absolute truth?

Is there an absolute truth?

We sometimes hear from the marketplace the comment that "The COAX® ejector is great and efficient, but, unfortunately I can't use it as I have a dusty environment and it would clog".

That is fascinating every time I hear it. Is it really so? I often wonder where this perception comes from, perhaps from competitors with single stage ejectors? However, there is one thing stating it and another thing proving it. So is there an absolute truth? Or, are there always two sides to the coin? We were pretty sure that it was a myth that COAX® would clog in a dusty environment as we had tried it so often under those conditions. Yet some customers claim differently. We decided to actually test it, record it and show the world the facts. Maybe it was OK with just a little dust? So, let's go all the way, let's create an environment where no one would practically work due to the level of dust. Let's use the COAX® and see if and when it would clog.

So we did, we set up a test environment that was dirtier that a production unit to see what would happen. The result was just amazing. We decided to make a demo unit and show it at one of our most important exhibitions, the Pack Expo in Las Vegas 2015. It was so nice to see; we have posted the results on YouTube to share with the world.

Let's look at the movie below and see, and maybe just maybe sometimes there is an absolute truth. Maybe sometimes, myths are created for others to prove just the opposite. By this, I really hope that at least one or two can see through the myth.

Find out why energy efficient multistage vacuum ejectors are slightly more susceptible to dust clogging and how this trade-off can easily be overcome in our white paper: 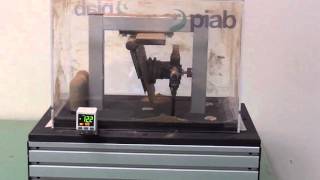 Can you use Piab’s ejectors in a dusty environment?