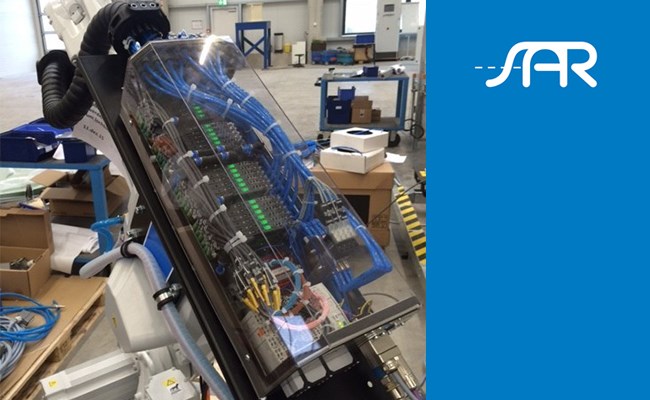 SAR integrates robots with compressed air driven vacuum pumps (single stage ejector). They contacted Piab to find solutions in areas which could be improved by our products. With Piab’s products, the current set-up would reduce air usage and avoid pressure drops in the tubing. The customer said that they now have better margins to their production goal and can run the robot as fast as they need.

We proposed the piCOMPACT®10X with an M8 connection. The customer installed 24 units instead of the 16 he had from the competitor. As the piCOMPACT® footprint is so small they actually used the same area. The piCOMPACT® has the world's most efficient cartridge inside – the COAX® Cartridge. This meant that the air tubing installed in the robot worked perfectly and could supply the need of all 24 units in a satisfactory way. The piCOMPACT® only needs 3.5 bar of air pressure to operate nominally. There was also one more thing, as the sensors in the piCOMPACT®10X were so much faster than the competitor, it meant that the signal back to the robot was so much faster than the competitor's and that also sped up the cycle for increased production.

The customer could use the robot to its full potential and still save 50% on air. Also, as the M8 connection was used, the installation time was extremely fast as it only needed one wire instead of two (competitor) wires per pump. One additional benefit was that the working conditions improved with the decreased noise level with piCOMPACT®10X.

Different product types can’t be compared. Do you want to remove the existing products?